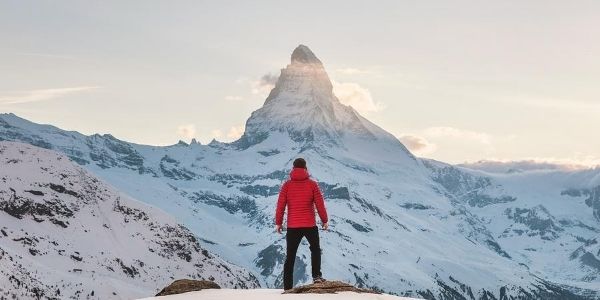 Fear of failure is simply the first step on the way to excelling. It’s a pretty big, stubborn step, but a step nonetheless.

This is how I view the journey from fear of failure to excellence:

I have suffered depression as a result of fearing to fail and who knows where that could have led to. Thankfully, I came out the other side enough to get on with life and attempt to excel.

Almost everyone experiences fear of failure in some form or other. It is a real fear for some people. It is something that, for an unfortunate few, is a serious mental health problem, something that shouldn’t be taken for granted.

I want to give you a simple tool that can help you take small steps (which grow into big steps) towards overcoming a fear of failure. It is not meant to replace professional mental health advice, it is simply what helped me.

It is a tool for those that know they are able to do what they need to but are suffering a block that prevents them from getting started on whatever it is that will change their life in some way or another.

This fear of failure is a limiting belief of what failure is.

What is a Fear of Failure?

I used to hate it when I saw articles start with “let’s look to the dictionary for a definition of….” But having done just that with a few important topics myself, I can see the benefit. So that’s my excuse for doing it right now.

The first definition of failure is ‘lack of success’. Ok, that’s pretty mundane, but there’s more. ‘The omission of expected or required action’.

When you consider these definitions a few things come to mind:

Let’s look at these a bit more. Failure is defined as the opposite of success, but simply because it is the best word for the job. In reality, failure is simply the absence of success.

What does this mean for us? It means that not achieving success in whatever task we’re doing leaves us back at square one, not ten squares further back. We’re not playing snakes and ladders.

It also doesn’t prevent us trying again and next time we will know more than we did before. We’ll have a new weapon.

This leads us onto the next consideration: the context of the failure matters. I’ll keep this one short.

The last consideration is, I feel, the most striking.

Failing to do anything is a failure.

To put it another way, being afraid to do something because you don’t want to fail means you fail because, using the first definition of failure, there is a lack of success.

So, if you haven’t started because you’re afraid to fail, you’ve failed. Sorry to break it to you.

You have learned one thing though: There is no point worrying about failing at doing something if you’re going to fail not doing it anyway. This is your new weapon. Use it wisely.

You have your first weapon, you have a desire to get rid of your fear of failure, let’s move onto the next level.

From ‘Fear of Failure’ to ‘Failing’ and on to ‘Learning’

The classic advice for overcoming any fear is to face it. It’s called Exposure.

Exposure works by putting yourself in a feared situation gradually, regularly until your fear for that situation starts to subside.

For fear of failure, that means exposing yourself to failure. But you can start small. Start with something that won’t matter at all if you fail.

Something like juggling. You may or may not have an urge to juggle, it doesn’t matter. It’s just a good example of a success-training tool. I learnt to juggle one night when I was about 12, staying at my sister’s place while she was out drinking with friends.

I was stone cold bored so I took an interest in something I’d never previously thought of doing.

I started with one juggling ball, getting the feel for the weight and throwing it just the right height. This was fairly simple, I had very few failures.

Then I introduced a second ball, making sure I could throw one ball while catching the other. This produced a few more failures, but still wasn’t too bad and I got the hang of that too.

Then the third ball came into the mix. Failure rate went through the roof. But I just kept trying, each time learning what I did wrong from the last attempt and eventually, that same night, I could juggle (for a few seconds at least).

Failure in this task was irrelevant. I had the time, I lost nothing from failing. But that evening changed a great deal in my mind that carried on long after the event. It trained my brain to move past failure and simply accept it as a learning process.

I think every other fear of failure article you read might be telling you to use psychologically-founded techniques to overcome this fear. That’s great if you can stick these practices. My suggestion is learning to juggle.

It won’t eradicate your fear of failure, but it will help get your brain accustomed to failure just enough to move on to a more difficult task, which will then train you even more, so that you can move on to another task, and so on.

To move from failure to learning, you just need to do something long enough to succeed and show yourself that you just learned how to do it, despite all the failures.

Learning could be described as failing, seeing where you went wrong and trying over and over again until you succeed.

From ‘Learning’ to ‘Excellence’

I’m guessing you want the next step, where you move to ‘excelling’. Actually, that doesn’t involve you doing anything wildly different. Just keep learning and you will reach excellence.

What I stumbled upon with the juggling, which I didn’t know at the time, was purposeful practice. This is a deliberate and systematic way of learning. This will take you from learning to excellence.

To learn more about it, I recommend reading the book ‘Peak’, by Anders Ericsson.

“So here we have purposeful practice in a nutshell: Get outside your comfort zone but do it in a focused way, with clear goals, a plan for reaching those goals, and a way to monitor your progress. Oh, and figure out a way to maintain your motivation.” — Anders Ericsson, Peak

The motivation part might seem like an afterthought, but that’s exactly when it works best. Motivation grows as a result of seeing success regularly, in small ways at first, but gradually in larger and greater ways.

An object in motion stays in motion until an external force acts upon it. Aim to keep those external forces positive; accelerating your motion, gaining momentum, lowering your fear.

Want to start moving past your fear of failure?

I’m not going to add an ‘until..’ to the end of that because learning doesn’t have to end.

What prevents us from starting our learning and ultimately excelling is that fear of failure, but it’s an obstacle that can be broken down one juggling ball at a time.

If you want to arrange a free conversation about improving or changing your career with a coach, send us an email to [email protected]

We want to see you fulfil your potential!

We use cookies on our website to give you the most relevant experience by remembering your preferences and repeat visits. By clicking “Accept”, you consent to the use of ALL the cookies.
Cookie settingsACCEPT
Manage consent

This website uses cookies to improve your experience while you navigate through the website. Out of these, the cookies that are categorized as necessary are stored on your browser as they are essential for the working of basic functionalities of the website. We also use third-party cookies that help us analyze and understand how you use this website. These cookies will be stored in your browser only with your consent. You also have the option to opt-out of these cookies. But opting out of some of these cookies may affect your browsing experience.
Necessary Always Enabled
Necessary cookies are absolutely essential for the website to function properly. These cookies ensure basic functionalities and security features of the website, anonymously.
Functional
Functional cookies help to perform certain functionalities like sharing the content of the website on social media platforms, collect feedbacks, and other third-party features.
Performance
Performance cookies are used to understand and analyze the key performance indexes of the website which helps in delivering a better user experience for the visitors.
Analytics
Analytical cookies are used to understand how visitors interact with the website. These cookies help provide information on metrics the number of visitors, bounce rate, traffic source, etc.
Advertisement
Advertisement cookies are used to provide visitors with relevant ads and marketing campaigns. These cookies track visitors across websites and collect information to provide customized ads.
Others
Other uncategorized cookies are those that are being analyzed and have not been classified into a category as yet.
SAVE & ACCEPT